Detroit Bikes started in 2011 when entrepreneur Zak Pashak saw a need for a high-quality, practical, and accessible bike made in the U.S. After surveying the bike market and noticing that it was dominated by poorly-made, foreign-manufactured products, Pashak moved to the Motor City to build his dream ride. Canada-born Pashak was naturally drawn to Detroit for its burgeoning entrepreneurship scene and rich manufacturing history—he saw it as the perfect place to open his manufacturing factory and start producing high-quality bikes built for life.

Detroit Bikes is the only bike manufacturer in Detroit, and the only company operating a fully-functional, large-scale bike frame factory in the U.S. Considering that 99 percent of bikes sold in the U.S. are made overseas (and only come back to America for branding), Detroit Bikes is unlike any other manufacturer. The Detroit Bikes team is dedicated to making the bike buying and assembly experience as simple and accessible as possible. A Detroit Bike ships to your door 99 percent assembled, and comes equipped with an instructional assembly video to help you finish the one percent of assembly at home. 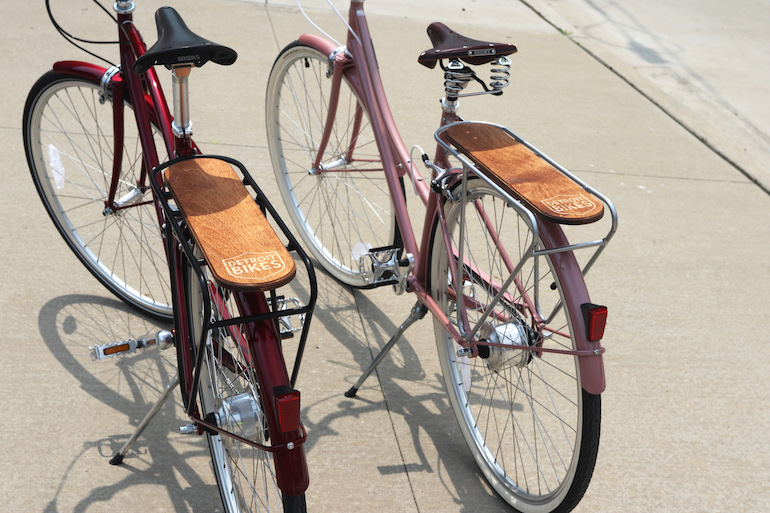 With the motto, “We believe that streets are best explored on two wheels,” Pashak wants to help transform Detroit into the motorless city. Detroit Bikes makes seven different types of commuter and utility bikes to ensure that there’s a style for every rider. If you’re a city-dweller looking for a bike built for exploring and commuting, for example, they have the A-Type, the B-type, and the Sparrow. If you’re looking for a trail-to-city ride, the Axel and Cortello bikes are made for you.  Detroit Bikes also caters to Motor City enthusiasts with the Limited Edition line, which features a Detroit Lions bike, a Faygo bike, a Detroit City FC bike, and a Slow Roll bike. To that end, Detroit Bikes also offers custom branding and fleet sales—their factory can produce ten to 10,000 bikes per fleet. The Detroit Foundation Hotel, Detroit Mercy, and Big Rock Brewery all have custom Detroit Bikes fleets, providing their guests, students, and customers with a customized mode of transportation.

Inside the Detroit Bikes Factory

The 50,000-square-foot Detroit Bikes Factory is a bike lover’s paradise. Located in the heart of Detroit, it can produce up to 150 bikes per day, and assemble another 400. At the heart of Detroit Bikes’ lineup is the U.S. Chromoly bike line. These bikes are 100 percent produced at the Detroit factory and are a true representation of Detroit Bikes’ dedication to craftsmanship. These bikes are made from American chromoly steel, which is typically used for race car roll ages. By using a thin tubing of chromoly steel in the bike frame, the U.S. Chromoly bike is both lightweight and strong—which makes for a top-of-the-line riding experience. Complete assembly and wheel-building on the A-Type, B-Type, Axel, and Sparrow bikes is also done at the Detroit factory, plus original equipment manufacturing and high-volume bicycle assembly services. But don’t just take our word for it—see it for yourself! Detroit Bikes offers factory tours that explain the ins-and-outs of their unique manufacturing process. Sign up for a factory tour today.

We gave one bike to every 2018 DPS valedictorian! Congratulations to Jordyn, valedictorian of Renaissance High School! Be cool, stay in school. Link in bio for more 🎓 🚲

Detroit Bikes has created jobs for the many people rooted in Detroit’s manufacturing industry, in addition to creating retail jobs in the city. At the Detroit Bikes storefront in Capital Park, you can ride home on your new Detroit bike or receive tune-ups with their lifetime warranty. Detroit Bikes takes pride in being involved in the Detroit community, building relationships, and giving back to the city. In 2018, they gave away a U.S. Chromoly Bike to every valedictorian in Detroit Public Schools (see above). They continue to partner with Slow Roll Detroit year after year.

It’s been extremely rewarding to partner with Detroit Bikes. Back in 2017, we began implementing a comprehensive growth strategy including on-site SEO, content marketing, social ads, email marketing, and social media management. We’ve loved watching Detroit Bikes grow as a brand and we’re honored to spread the Detroit Bikes message. If you’re interested in gearing up for summer, order your new Detroit bike online or shop their products in-store in 24 states and four countries. If you’re a local, we highly recommend stopping by their Detroit store and taking a test ride!

Looking for growth marketing services? MSC can help you with that. Fill out this form and a team member will be in touch shortly!